“It’s a desire to free oneself from that restraint that at times, translates into a battle: the artist seems to give us an encouraging message and a push, showing us a possibility, to get out from an obstacle or problem; like men do, that with insistence and desperation, try to free themselves from the white and cold walls of solitude and death.” 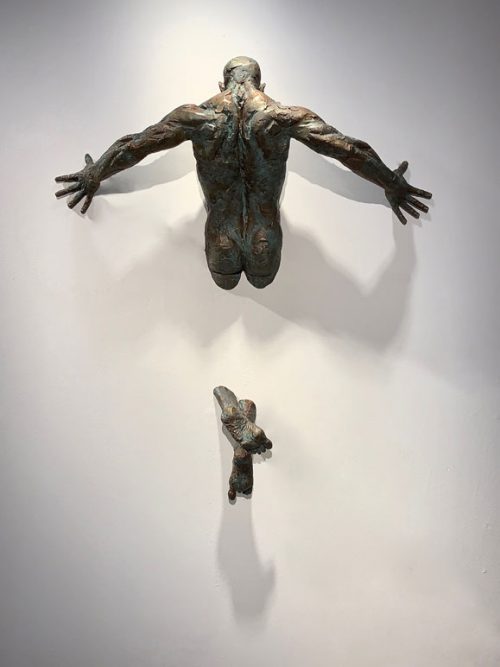 Matteo Pugliese moved to Sardinia with his family in 1978. After completing classical studies, he returned to the Milan where in 2005 he graduated in modern literature at the Università Statale. Trained as a self-taught artist, Pugliese matured a marked propensity towards drawing and painting, searching for a specific sculptural material in the skill of the classical Greek and Renaissance masters. The plasticity typical of Michelangelo, Canova, Bernini and Rodin, and the restless sign of Egon Schiele and Francis Bacon are in fact some of the stylistic and formal traits that would influence him for a long time. Among his most famous sculptural productions the Extra-Moenia stand out: bronze warrior creatures blocked in the climax of the struggle towards the passage to ‘another’ dimension. Tormented and powerful, these figures try to free themselves from the internal grip of the walls that ‘possess’ them to seek outwards, as if they were material impressions of strength and dynamism perpetually in search of a balance between heart-breaking twists and vital energies, both physical and intellectual.