“You must not turn your back on the sources that nourish you. I was born on the lands of Kurdistan. I grew up and lived with the motifs from Kurdistan and found meaning in everything through those riches.” 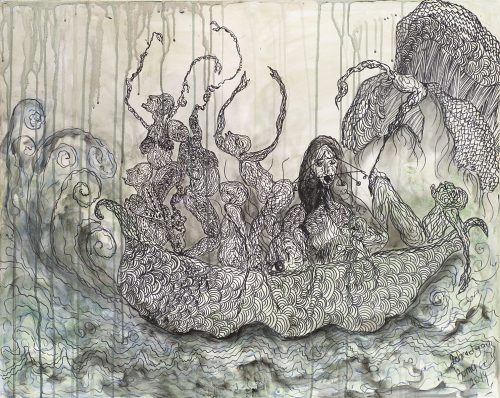 Born in 1989 in Diyarbakır, Turkey, she currently lives and works between London and Europe.

A Kurdish artist, journalist and writer with Turkish citizenship, Zehra Doğan graduated from the Dicle University of Art and Design. In 2010 she became the founder and director of JINHA, a Kurdish press agency made up exclusively of women. As a feminist activist, strongly committed to politics, Doğan was the first to testify against the persecutions and conditions of slavery that Yazidi women were forced to endure during the war in Syria and Iraq. In 2017 she was sentenced to almost three years of prison for “”terrorist propaganda”” after posting a drawing which sarcastically depicted the rubble of Nusaybin – the Kurdish city destroyed during the clashes between state security forces and Kurdish insurgents – on her Twitter feed. Supported by famous artists such as Banksy and Ai Weiwei during detention, she was released in 2019. Throughout her imprisonment, she continued to create artworks with any materials she could find: tea, ink, juice and organic waste. Animated by a constant spirit of criticism and resilience, one which takes shape in pictorial and graphic works made of recycled supports and improvised materials, Doğan’s art may be defined as ‘journalistic’: a penetrating sum of the intimate dimension and thorny events, one which reports the stories of the pain and courage of the women the artist met throughout her journey.