“They are spaces of play and performance closed by walls that seal a magical space, as one overlooks that wall the rules change: a sphere/ball captures the total attention of thousands of people that are observing the trajectories in a stadium. Either one cries for other people’s stories, imaginary ones, laughs, listens to the voices of musical instruments, or sings, in theatres. The humanity reunited inside these spaces seems to me to be expressing and desiring the best part of the human being.” 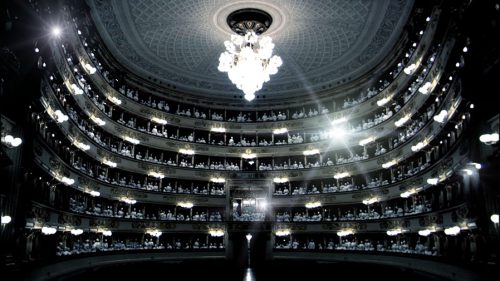 Born in Padua in 1963, she currently lives and works between Milan and Turin.

After attending the Academy of Fine Arts in Bologna, Grazia Toderi moved to Milan in 1992 where she immediately stood out for her innovative use of video – often structured as a continuous cyclical projection – which remains the tool of choice in her work. The camera fixes on everyday objects in domestic contexts (in which emotions in the viewer are aroused by the sensation of the expansion of space and time towards infinity), the introduction of repetitive actions that suspend the narrative and her concentration on details are some of the recurring elements in the artist’s early works, who in 1993 was invited to participate in Aperto ’93 on the occasion of the Venice Biennale. Over time, however, her gaze rose from a vision immersed in the world, opening up to views of stadiums, arenas and theatres which, along with aerial images of cities, would become the object of a research approach full of powerful reflections on the human condition. Central to Toderi’s poetics is also her dialogue with literature but above all with painting: a technique that she feels close to because of the very timelessness usually reserved for paintings, and which she manages to confer with great naturalness to her video images.