“Before the technique, comes the study of nature. I look to nature and to the roots of trees; sources of energy and memory, or the lightness and poetry of leaves. I love collecting and embroidering them to my diaries, studying their colours and textures, to then translate them onto tapestries or in choreographies for my performances.” 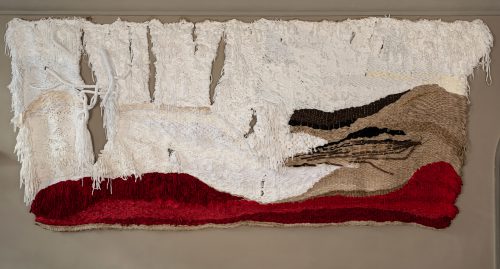 Performance is the expressive medium through which the artist brings his sculptures to life, connecting the wrapping to the bodies of the performers, in a single movement in harmony with nature. Somewhat poised between two- and three-dimensionality, his artistic research and artistic production are expressed in a very personal textile technique called ‘wrapping’, inspired by the ancient art of manual weaving with a vertical loom, which consists in the incessant multiplication of knots that wrap around a core of textile material, joining and weaving tales into decorative tapestries and bodies with shapes reminiscent of tree roots. His works highlight the close relationship between the artist and nature: in his sculptures, cotton, wool, linen, hemp and silk are woven into branches, leaves and iron wire, creating a dense network of layers that, like cocoons, host human feelings and emotions. Having trained at the Scuola Superiore d’Arte Applicata of the Castello Sforzesco in Milan, Thomas De Falco now lives and works between Milan, Paris and Rome.