“My studies in classical art, made me discover antique still lives. I was interested in the theme of vanitas, that use the hourglass and the skull; two defining symbols in western art. I call my compositions ‘time shrines’. Since the beginning of the history of human beings, these created shrines in different moments and places to represent what they feared or admired. I’m convinced that men are dreamers, not invaders. And art, will be an ally in our resilience and in this new evolution.” 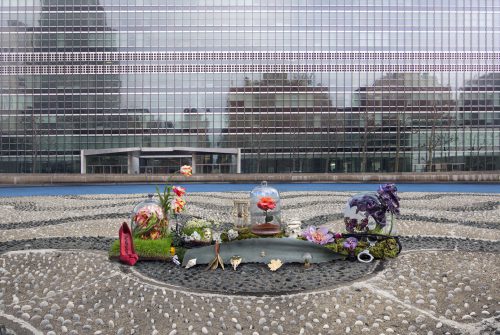 Born in 1968 in New York. She currently lives and works in Milan.

A graduate in Anthropology and Art History from Columbia University, Anne de Carbuccia is a Franco-American environmentalist artist and filmmaker interested in nature and the impact that man has on it. The artwork exhibited, Women Empowerment, was created at the United Nations headquarters in New York on 8 March 2017, on the occasion of International Women’s Day. On her travels around the world, during which she documents and preserves the memory of sites, animals and cultures at risk of extinction, the artist creates temporary installations in symbolic places, and then captures them in photographs, thus maintaining a memory of that ‘endangered’ moment. With the images she has collected during numerous expeditions to Antarctica and the most remote areas of the planet, de Carbuccia created the photographic project One Planet One Future in order to speak through images about the themes most dear to her: water, endangered animals, endangered habitats, refugees and destroyed cultures.