From the ceiling, down (2020) is the permanent mural artwork created for the entrance of the PART by the English artist David Tremlett, together with the participants to the San Patrignano workshops.

Among the most important artists in the international scene of the last 40 years, close to Russian constructivism and conceptualism, since the 1980s David Tremlett has focused on the creation of wall paintings: pictorial interventions conceived for specific spaces, both public and private, indoors and outdoors, which reflect the deepest and most articulated connections between art and architecture. His large-format wall drawings, the best known and most consistent part of his production, are characterized by the use of freehand coloured pastels on the surfaces, and are often made in a choral form with students from art schools and associations. The result of a ten-year conversation and numerous collaborations between the acclaimed English artist and the architect Luca Cipelletti, author of the architectural project and the installation of the PART, From the ceiling, down is the permanent artwork welcoming visitors at the entrance to the museum, made together with the participants to the San Patrignano workshops.

“I began to reflect on the work that we would have carried out at PART since my first visit to the Malatesta Temple in Rimini. That place, with its silence, made me think of the volume and proportions of the space that would host the work. The ceiling at the entrance to the PART had something special to me, in terms of heights, proportions and architecture: I felt the need to re-extend this gigantic architectural structure downwards. And slowly, delicately, bring it down the walls, so as to create columns on which it could rest, permanently.” David Tremlett 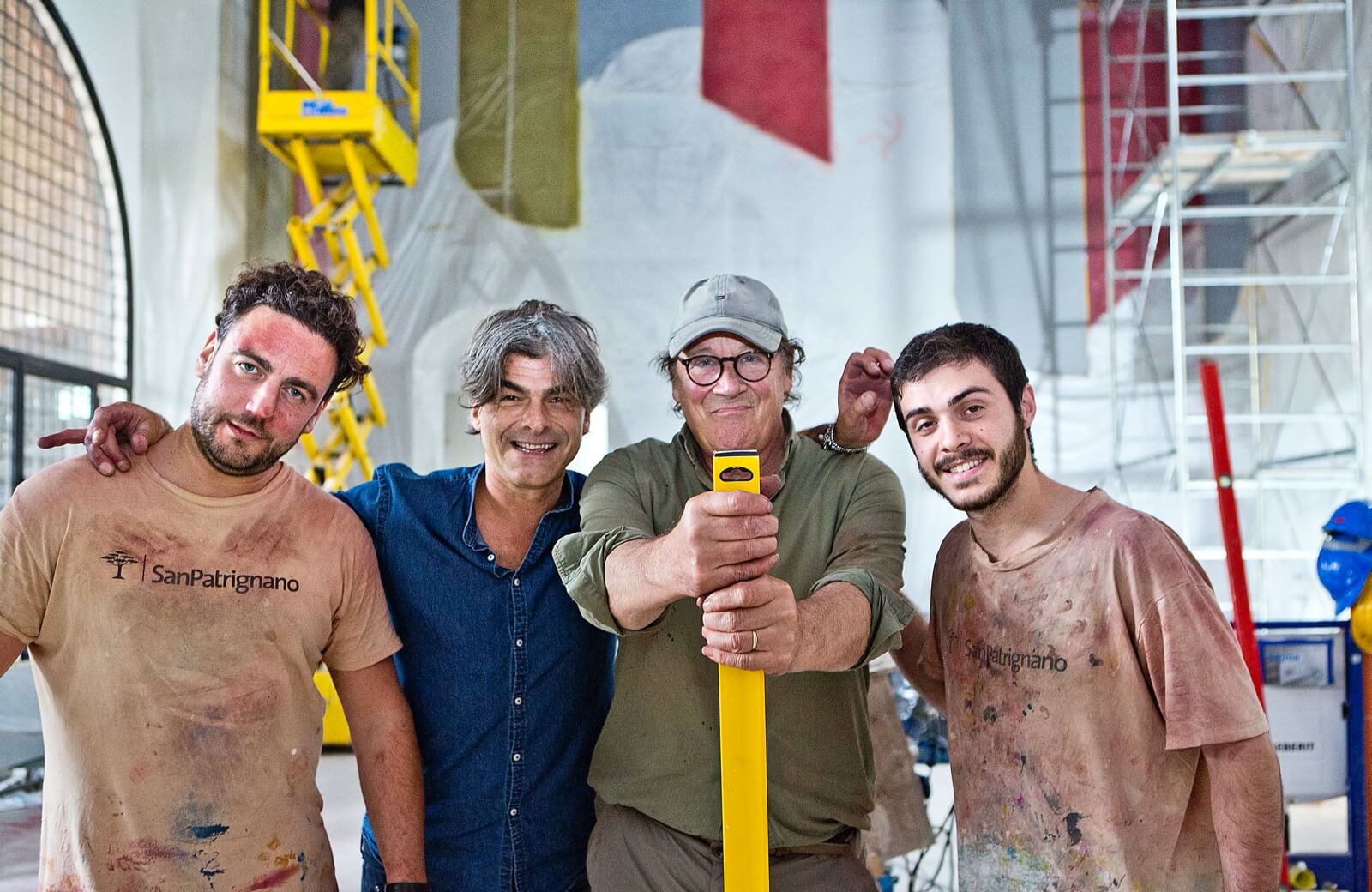 A sculptor born in St Austell, Cornwell, in 1945, David Tremlett studied at the Birmingham College of Art and at the Royal College of Art of London. Since the 1980s he has produced most of his works in form of wall drawings, executed worldwide both in museums and in public and private spaces: the famous so-called Barolo Chapel in La Morra, in the province of Cuneo (1999, in collaboration with Sol LeWitt), the British Embassy in Berlin (2000), Palazzo Re Enzo in Bologna (2003), the church of Villeneauxe-la-Grande (2005), the synagogue of Zamość (2006). Tremlett exhibited internationally in galleries and museums such as the Centre Georges Pompidou in Paris, the Stedelijk Museum in Amsterdam, the Musée des Beaux Arts in Grenoble, the Pecci Museum in Prato, the Ikon Gallery in Birmingham, and the MoMA in New York. In 2011, he was commissioned a wall drawing by the Tate Britain, Drawing for Free Thinking, wide 450 square metres, now permanently on show at the museum’s entrance wall. In 2016, he participated in the group shows Conceptual Art in Britain: 1964-1979 at the Tate Britain, London, and in Drawing Dialogues at the Drawing Center in New York. Among his most recent interventions are those for the church of Coazzolo in Piedmont, the Bloomberg London Building, the Complex of Santa Chiara in Bari, a public artwork on the houses of Ghizzano, in Tuscany, and a fresco in the deconsecrated chapel of the Relais San Maurizio, in the Italian province of Cuneo.

The historical buildings of Arengo and Podestà, restored to their architectural splendour. In one of Rimini's most beautiful squares.