“There is no background in Gallo’s paintings, a type of impermeable wall holds the battling signs that explode on the pictorial surface, stretched with colours that resemble the abstract sidereal heights and vertiginous marine depths. The painting becomes the theatrical representation of an archaic belligerence between destined forces that never subside; between energies that can be evoked but never blocked. Because of this, the artist exploits a language held between the organic and the metaphorical, between the informal and a suspicious figurativeness.” 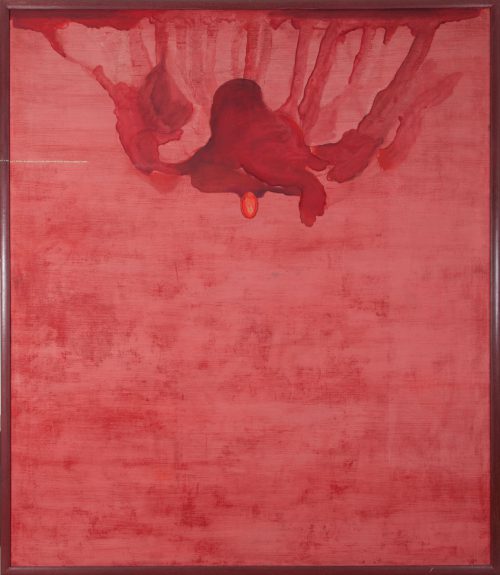 The son of a painter-restorer, Giuseppe Gallo studied architecture and learned the importance of materials from his father. Originally from Calabria, in 1976 he moved to Rome to work in the former Cerere pasta factory in Via degli Ausoni, one of the oldest factories in the city, which from 1905 had supplied pasta and flour to the capital until 1960, only to then be turned into a place of research and encounter among artists over the following decade. In the 1980s, Gallo thus became part of the San Lorenzo Group, also called the ‘Nuova Scuola Romana’, a reality that – along with Arte Povera and Transavanguardia – represents the third mainstay of Italian contemporary art in terms of role and importance. Gallo dedicated to the definition of a new way of understanding the painted image, focusing on the recovery and use of traditional techniques such as encaustic, oil on canvas and patinated bronzes. However, the artist is best known for his more explicit use of figuration, both in the form of fragments and citation from the past. His paintings are in fact animated by brightly coloured images and symbols in which the use of geometric shapes and meticulous figurative details stands out against largely abstract backgrounds.