Two historical buildings, restored to their architectural splendor. A new, different museum. A rare fresco, a masterpiece of Italian medieval art. An exceptional art collection: an exciting overview on contemporary creativity. In one of Rimini's most beautiful squares.

The link between Rimini and the newly restored, historical buildings of Arengo and Podestà, today Palazzi dell’Arte, and Palazzo Garampi, the headquarters of the Municipality and the Mayor’s Office, is more than merely symbolic. The PART clearly highlights the centrality of culture and art, of civic life and of the sense of community which now drives and guides the city’s policymaking.

Piazza Cavour and its surroundings are an example of this, right in the heart of the old town. The renovated Teatro Galli, the new Federico Fellini International Museum, the Pescheria and now the PART all dialogue with one another, highlighting the intentions and purpose of policies combining public space and public life, historical heritage and collective and individual development, all in a contemporary, plural and inclusive outlook.

This challenge arose in response to an unprecedented agreement between public and private institutions, one which led to the municipal chambers of the 13th-century Palazzo dell’Arengo and the 14th-century Palazzo del Podestà – now restored and rearranged in the light of a museographical project that respects and enhances their architectural characteristics – to house the Collection of the Fondazione San Patrignano.

The agreement between the Municipality of Rimini and the Foundation has thus endowed the city with a new museum, designed to provide citizens and visitors with the chance to approach contemporary art, as well as the means to enhance the donations of artworks received. The collection, begun in 2017 and continuously expanding, has been put together in support of the Community by Italian and international artists, collectors and gallerists. 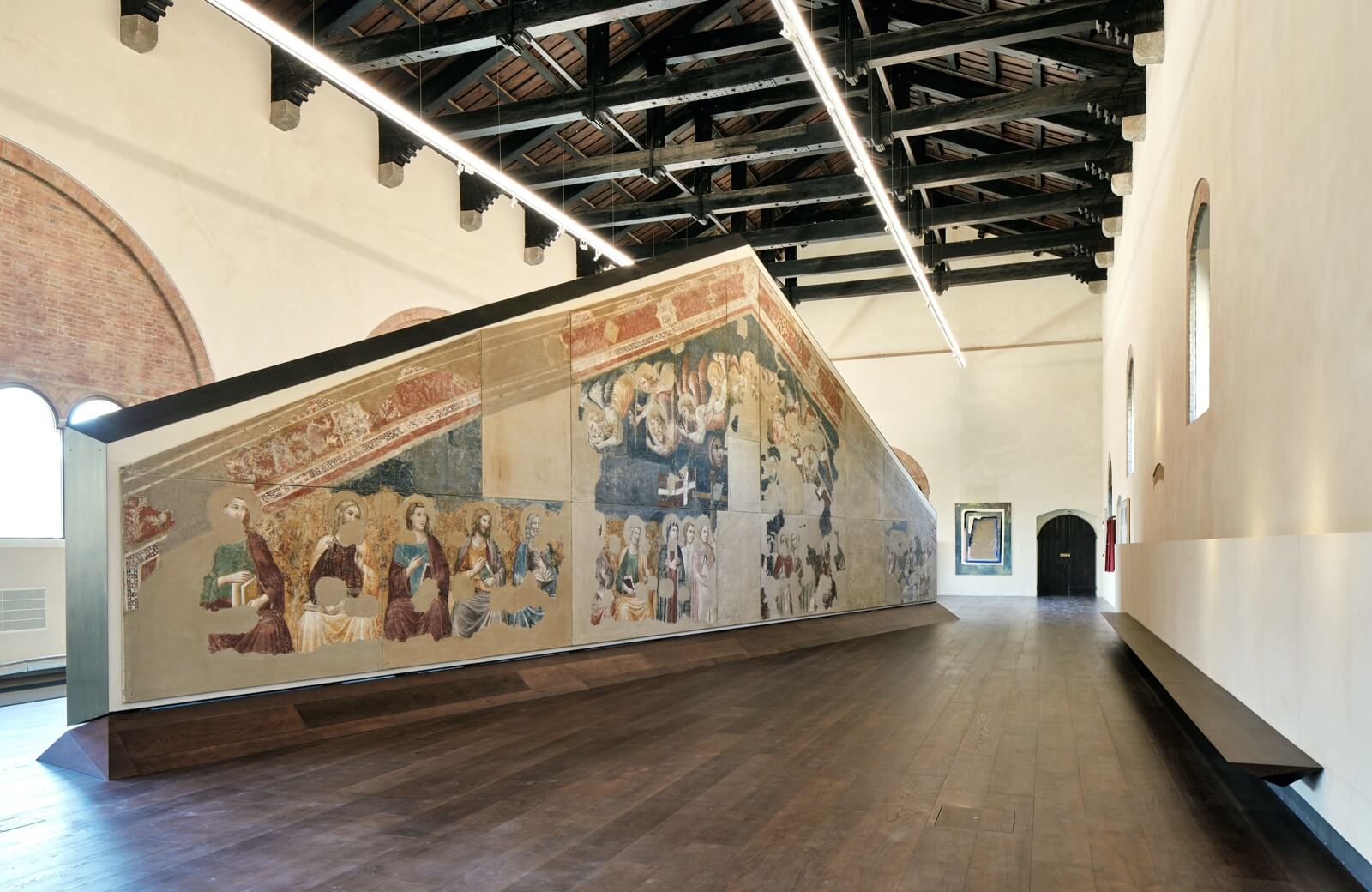 The installation of the works, together with the restoration and functional adaptation of the buildings, was carried out by Studio Ar.Ch.It, led by Luca Cipelletti.

The project seconds and relishes the eclecticism and variety of the Collection, turning it into one of its strengths. It proposes an extremely free use of the contents of the museum, not bound by an itinerary of historical-critical relationships between the works. These are the protagonists of the PART, of the relationship with the medieval spaces of the Palazzos that showcase them and of the interplay with visitors. The lighting aspect, designed to enhance both the Collection and the display spaces, was entrusted to the architect and light designer Alberto Pasetti Bombardella.

The result, as the Mayor of Rimini, Andrea Gnassi said, “is a new model of development of which one of the main guidelines is in the valorisation of our historical, cultural and artistic heritage. A paradigm shift, for a city starting afresh on the basis of its true identity, from its roots, with an increasingly international gaze, and constantly looking towards the future.”

From 2020, Rimini lays claim to a new jewel in the crown of the urban quadrilateral, already home to the Federico Fellini International Museum, Castel Sismondo and Piazza Malatesta, the Teatro Galli and the Tiberius Bridge.

The historical buildings of Arengo and Podestà, restored to their architectural splendour. In one of Rimini's most beautiful squares.