The display of the artworks, together with the restoration and functional adaptation of the buildings, was carried out by the Studio Ar.Ch.it of Luca Cipelletti, who describes hereby the architectural and museographic project at the core of the PART. 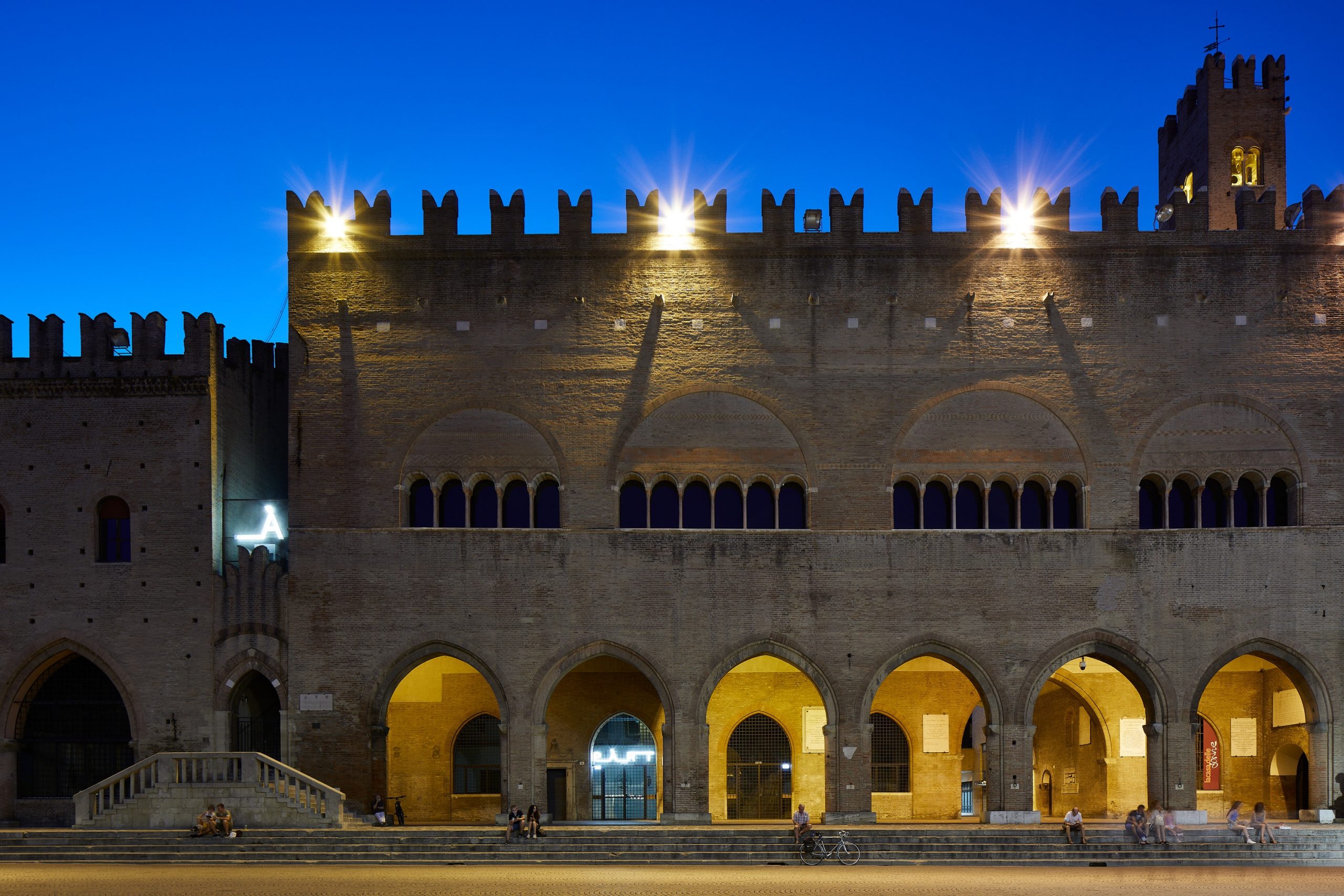 Building a relationship between a historical container and a contemporary art collection. This was the main planning challenge for this new Museum, designed to interface with a vast and diverse public.

The 13th-century Palazzo dell’Arengo and the 14th-century Palazzo del Podestà, home to public administration for many centuries, were in a decaying state due to a process of ‘normalisation’ which had hidden away the interior architectural elements, creating a sharp contrast with the expectations raised by the monumental exterior.

The initial aim in terms of architectural reappraisal was to reacquire the breathtaking perception of the medieval volumes of the two buildings, avoiding faux historicisms, so as to bring back to light the original decorative elements, such as the sequence of Palladian trusses, the great mullioned windows and the original materials. The interventions of technical modernisation, repainting, the choice of floor materials and the new window fittings thus became an opportunity to express the synthesis between linguistic-functional contemporaneity and historical-cultural valorisation.

The earmarked works to be presented in the spaces constitute a prestigious collection, but of a miscellaneous nature, without a preordained curatorial overview, if not that of being ‘contemporary’. What might appear as an apparent limit was instead interpreted in the museographical project as a further opportunity. By avoiding the rigidity of the ‘box within a box’, greater space was in fact given over to reversibility, to perception of the architecture and a freeform positioning of the works, in such a way that they might interact most of all with the space more than between one another. Despite having a common thread running through it, the display layout thus alters along the itinerary on the basis of the specific architectural setting. Dimension, position and materials are variable and adaptable: they always draw inspiration from the proportions and character of the architecture in order to become functional devices. Also as a homage to the most solid Italian museographical tradition of the masters who led the reconstruction of the country’s Civic Museums in the post-war period.

The architectural and museographical project

Of key importance in the development of the project was the acknowledgement of the surrounding urban fabric. The same square hosts the Teatro Galli, Palazzo Garampi and the Vecchie Pescherie (‘Old Fish Market’). On the ground floor, the inclusion of two interfacing areas – namely the ticket office and the cafeteria – responds to the desire to make the building accessible and permeable, so that it may be enjoyed freely, thus becoming an integral part of the life of the town centre.

The museum itinerary thus starts from the ticket office. So as not to alter the equilibria of the ancient building, in the spaces where it was necessary to form separate environments such as the cafeteria and the ticket office, any new elements were made clear, inserting free-standing dividers into the space: walls plastered with lime in the shades of the pre-existing walls, which allow functions to be carried out through the gaps in them created by the detraction of material. The itinerary continues in the two rooms of the Podestà, entirely given over to the display of works. In order to increase the available display surface in the rooms with previously decorated walls, supports were designed in keeping with a logic of alternating full and empty spaces, in relation to the windows. The bases, like the floors, were produced using San Marino stone: a local material already to be found in numerous original details. Although the stone is no longer extracted, a number of quarry blocks were found. The stone was laid in such a way as to underline architectonic relationships and the perspectival axes. On the upper floor, in the Sala dell’Arengo, the display revolves around the dividing wall which hosts the major fresco of the Last Judgement by Giovanni da Rimini. The positioning of the dividing wall, placed diagonally and at the centre of the space, allows for a management of the itinerary which valorises the perception of the room and the works. On entering, one has an initial impact with the space in its entirety: a great void, in which the dividing wall is perceived end-on as a blade that leads the visitor towards the natural light of the mullioned windows. Step after step, one’s gaze encounters the works on show, and little by little, the full size of the detached fresco is revealed. This museographical expedient drives the itinerary and splits the room into two sections: one on the side of the mullioned windows, very bright and thus functional for the display of sculptures; the other, on the north side, more closed and suited to photographic works and canvases, which generally call for softer lighting. The display supports, with flared corners and metal edges that pick up on the bronze of the window fittings, are light, almost bidimensional, and while suitably distanced from one another, mark out the exhibition path. Suspended architecture, generated by the rhythm of full and empty spaces, in relation to the container. Other than the exhibitive aspect, the floor in this room was replaced entirely with oak parquet: the same material used for the dividing wall hosting the large central display. The wood, reminiscent of the decking on the first floor of historical palazzos, dialogues with the sequence of wooden Palladian trusses, thus tying together the whole architectural volume. The replacement of the window frames, which proved particularly complex, was resolved by using a high-performance minimal profile with a bronze effect, redesigning the geometries of the mullioned windows. Needs for piping and wiring have been transformed into display and furnishing elements, designing a system of seats and perimetric display cases housing the mechanical systems, thereby integrating them into the space, without interrupting the perceptive equilibrium of the room. In an adjacent room, a simple and temporary display was designed, in order to exhbit the entire collection. The room will later be subjected to a second renovation process with the aim of removing the partitions, the half-landing and the lift shaft, which will be moved to the outside of the building. The volume will thus be opened up, casting light on the great wooden trusses. The furnishings of the museum, in oak, play on material and perspectival detraction, which are themes that come back in the details of the display units: flares, detractions and perspectives that generate a perceptibly continuous movement.

Developed in collaboration with the architect and expert in museum lighting Alberto Pasetti Bombardella, the lighting project responds to the overall reasoning within the project which couples the display function with the interpretation of the architectural space through the use of overhead cables. The principle is based on the use of a device created especially, which allows both for the valorisation of the works and the definition of ambient light settings in the various rooms. The lighting module, known as ‘Arengo’ and developed and produced by specialised artisans, offers diverse lighting options, making it possible to customise the illumination through the choice of different shades of white as well as various colours. The structure of this suspended linear module is made up of a square-section parallelepiped, with a core in aluminium that houses the various lateral light diffusers in polycarbonate and the sources along the top used for indirect lighting. The lower portion features a groove for the insertion of spotlights on individual works. The composition of the module, in its linear form, may reach 32 metres in length, as in the case of the Salone dell’Arengo, making it today the largest ‘lamp’ ever created in the museum sector.