The evolution behind Schifano’s work is extremely contemporary because it’s beyond all linearities, out of every mechanism, every linear evolutionism that has been typical of avant-garde movements until the 70s. His means to progress lateral waste, to grouping artworks, for his obsessive use in periods of expressive modes make him an artist that with his cultural curiosity was able to touch methods that have therefore played with the artisanal dexterity of the pictorial mean and also the automation of modes tied to technology. Achille Bonito Oliva 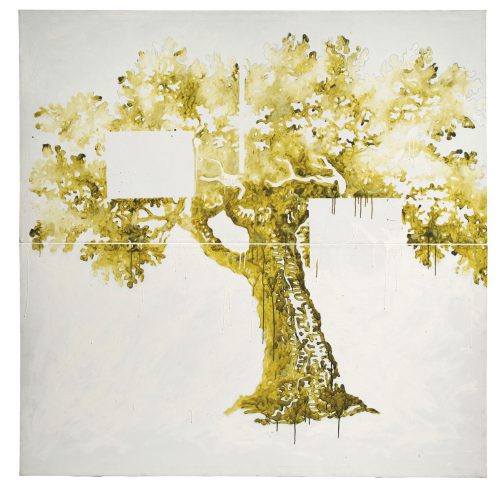 A tireless experimenter with the whole range of pictorial languages, Mario Schifano began his training by collaborating with his father, an archaeologist and restorer at the Etruscan Museum of Villa Giulia in Rome. He soon abandoned this field and began his pictorial production, making his debut in 1960 with a series of monochrome paintings that offered the idea of a ‘screen’ intended as a transfigured object that would later contain figures, letters, road signs and fragments of signs taken from consumerist civilisation, according to the conscious sensitivity of the American pop atmosphere that the artist had already experienced in 1962, following a trip to the United States. Belonging to the Italian Pop group that developed and became famous in Rome in those years, together with Tano Festa, Franco Angeli, Sergio Lombardo and others, from 1964 Schifano also experimented with film: a medium that fits perfectly into his research into the uninterrupted flow of images produced by our technological civilisation. Following this path, from the 1970s Schifano has made use of common subjects, taking them out of context and popularising them, as he did with the tree on display.