Born in 1926 in Morciano di Romagna (Rimini). Lives in Milan.

His works from the 1950s are high-reliefs where a unique and previously unknown sculptural “writing” emerged, variously interpreted by the most important critics. 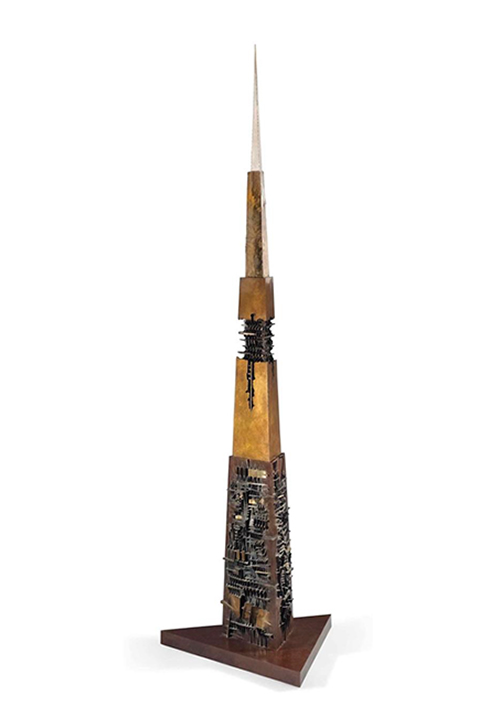 Born in 1926 in Morciano di Romagna (Rimini). Lives in Milan.

His works from the 1950s are high-reliefs where a unique and previously unknown sculptural “writing” emerged, variously interpreted by the most important critics. In the early 1960s he turned to three-dimensional work and focused his research into the solid geometric form: spheres, discs, pyramids, cones, columns, cubes, all in burnished bronze, are lacerated, corroded, excavated in their depths, with the intention of destroying their perfection and discovering the mystery closed within. The formal juxtaposition between the shiny perfection of their geometric shape and the chaotic complexity of their insides becomes a constant in Pomodoro’s production. In 1966, he was commissioned to make a sphere, three and a half metres in diameter, for the Expo in Montreal. Now in front of the Farnesina in Rome, it marks his shift towards monumental sculpture. This was the first of several works by the artist placed in symbolically important public spaces. Lancia di luce is a work designed with a direct reference to foundry work, with the light and absolute idea of a monumental element with a triangular section, like an obelisk pointing upwards, a modern signal from the street or from the sky, with its strong light recall.