“My work stems from the photographic image, onto which, when bringing it back to paint, I somewhat realise a withdrawal of the landscape. This operation becomes paint; remains an echo of the landscape, existing in a preponderant manner as a sort of ghost in my paintings.” 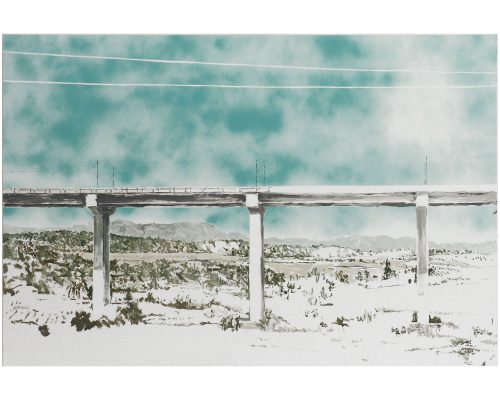 Born in 1971 in Rome, he currently lives and works in Milan.

Gianluca Di Pasquale studied painting at the Academy of Rome and attended the Academy of Fine Arts in Granada for a year. His artistic production plays out on a figurative pictorial level, with particular attention to the landscape element, dotted with architectural details, figures in the distance and plants painted with precise, and rhythmic brushstrokes within broad white spaces that constitute places of meeting and mediation between nature and civilisation. Forever in search of harmony and balance between an anthropocentric and a natural stance, his most recent influences include Henri Matisse, Pierre Bonnard and Henri Rousseau. Speaking of his works, the artist states: “Usually my work starts out from a photographic image, and in transferring it to the painting, I carry out a sort of subtraction of the landscape from it. This operation becomes painting itself; an echo of the landscape remains, a sort of ghost that is present throughout my paintings.”