Alessandro Busci describes that he was struck by San Siro’s stadium, not during the day, still less on a Sunday, when that body animates, besieged by a crowd clamouring and swarming, but at night: in a drizzling, winter night, when water softens the outline of things, blurs details and creates unknown perspectives and reflections off puddles; the yellow gleam of the lights refracts into a sulphurous halo and silence, becoming even more incongruous, in a place which we’re used to thinking as an invading sound of loud voices and shouts. Ada Masoero Donated by the artist. Enamel on corten steel, 2017, 160 x 240 cm. 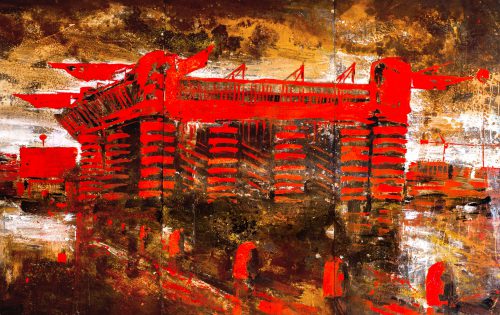 Busci’s pictorial research is characterised by constant experimentation with unconventional techniques and supports such as enamels and acids on steel, iron, aluminium and copper, as well as his attention to the materiality and concreteness of the pictorial and calligraphic stroke. Capable of translating landscapes and memories of cities into evocative atmospheres and urban visions through the search for colour (with decidedly expressionist tones and a magmatic consistency), Busci’s works seem to want to launch a sort of hymn to Futurism, but with less heroic emphasis on change than that promulgated by Filippo Tommaso Marinetti in 1909. His subjects all belong to the peripheral urban landscape. Stations, construction sites, industrial warehouses and stadiums are all immortalised in twilight, as if to underline the insistence on the poetics of the suburbs, typical of Mario Sironi and many American painters of the 1930s. A painter and architect, Alessandro Busci has collaborated with the Atelier Mendini in Milan since 1997, with which he carries out projects in architecture, decoration and exhibition design, such as that at the Museo Teatrale alla Scala and the Palazzo Reale in Milan.