“Matter has the ability to modify an intention or to underline strength. My sculpture is born from painting as a third way to dilate the space of drawing, of painting, and so on. If I use cement to model, I have the sensation to build, with a consequent freedom to destroy; same happens with tar, iron and lead.” 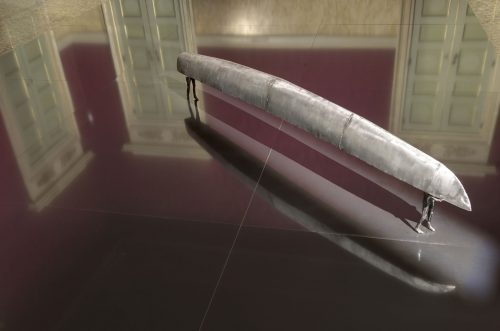 Born in 1960 in Bellano, province of Lecco, city where he lives and works.

The son of an artist, Velasco Vitali began to paint as a child, studying as an autodidact with an interest in painting, sculpture and graphics. With his works – which are formalised both in a pictorial and a plastic-sculptural vision – the artist mainly deals with contemporary socio-cultural themes such as the Valtellina flood of 1987 or the Chernobyl disaster of 1986. While maintaining a constant reference to the human figure (especially in his major work on portraiture), over time his painting evolved, opening up to the landscape. The discovery of Southern Italy, Sicily in particular, marks an important moment in his reflection on views of the Mediterranean ports, acting as a counterpoint to his more analytical vision of Western metropolises. The encounter with Sicily would also bring Vitali closer to sculpture, making use of materials typical of illegal building practices, such as iron, tar, cement, lead and wire mesh. Famous in this regard is his series of dogs produced from 2003 onwards. “While illegal house-building is prosecutable, in art, instead, it is an advantage: it feeds the imagination and inspiration. Abusing a thought or a material means experimenting with new ideas and new materials,” the artist stated in an interview in 2016.