“My landscapes have a Marchigiano accent, but it wasn’t a choice. I had that scenery in my eyes and mind because I was born there, because it’s the first thing one can feel when we’re still in the maternal womb, with the lights and noises. As soon as we open our eyes to the world, we see the light of our mother’s face and the surrounding landscape. A great set of sounds, visions, smells and tastes that are preserved in the memory.” 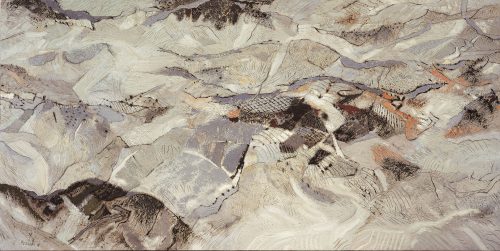 A painter and drawer, Tullio Pericoli enrolled at the Faculty of Law in Urbino at his father’s request, but shortly before graduation he interrupted his studies for fear of embarking on a career that he did not feel to be his own. In 1961 he moved to Milan, where after a few years he began to collaborate with numerous newspapers and magazines such as the Corriere della Sera and the weekly L’Espresso (both in 1974), and later La Repubblica (in 1984). His drawings and portraits for newspapers are the activity for which he became known, but throughout his career the artist has never stopped depicting the landscape, initially pursuing a more abstract path (identifiable in the stratifications of the cycle of ‘geologies’ and imaginary horizons with watercolours, ink and pencils on paper), and a much more physical style in recent times (through the exploration of new landscape morphologies and details of nature). The two subjects, to be viewed as topics of investigation following the same research path, are aspects that allow the artist to undertake continuous renewals of the pictorial experience. In 1995 Pericoli also approached the world of theatre, for which he has since designed scenes and costumes for various shows.