“I usually use colours that don’t exist in nature: azure, pink and grey. The first is an atmospherical colour. I always use different blues; also small drops of cobalt orientate the colour. Pink, the incarnate colour and grey, at last, has the ability to welcome all colours. Within all my colours one finds white. The surface gives back a light, white powder that comes from the inside.” 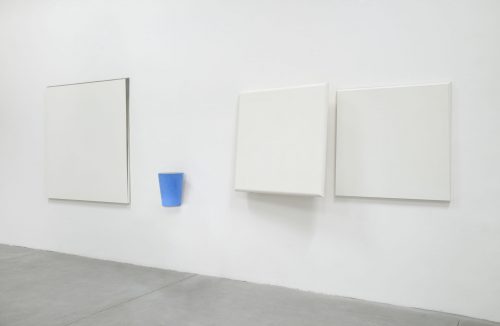 Ettore Spalletti’s artistic research began in the early 1970s and immediately stood out for its use of pure shapes and bright colours that move on the edge between two- and three-dimensionality, blending painting and sculpture, tactility and image, in his luministic, volumetric and architectural immersion of space. Light blue – the colour par excellence that he experiences as an environmental condition – and pink – shades of the incarnate body in continuous mutation – but also grey, white, green and yellow make up the artist’s ‘chromatic moods’ of choice, those that give his paintings, drawings and sculptures (often square, rectangular or round bodies similar to forms of objects taken from everyday reality) the breath of chromaticism imbued with the taste and light of his homeland, the Abruzzo region. Spalletti’s art is timeless, absorbing the depth of history, leaving the spectator free to interpret references to classical and religious forms.