“Everything is contemplated in the mind without meditation. We make a very complicated response. Just to look at a floating branch evokes very complicated objective and non-objective responses. The artist must slow all this down, mentally. It is this mental experience that makes the representation of beauty possible.” 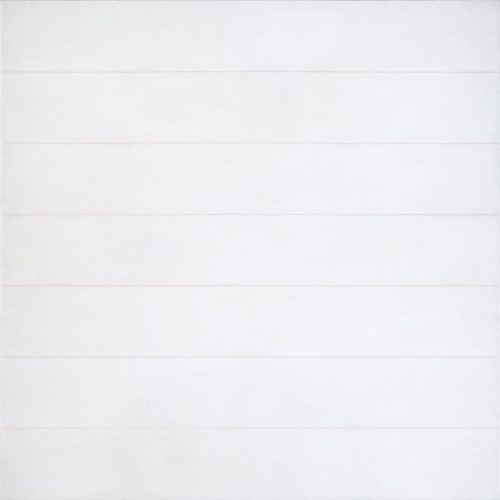 A Canadian-American painter, Agnes Martin is one of the few women who managed to emerge from within the climate of abstract painting that developed after World War II in America, dominated mainly by male figures such as Mark Rothko and Barnett Newman. After growing up in Canada, she moved to New York in 1931, where she attended Columbia University and came into contact with the lively artistic environment, taking an interest in Oriental thought, particularly Zen. Attracted by the city’s natural beauty, she then moved to Taos, in the state of New Mexico, where she would remain for the rest of her life. Her artistic production – dominated by prolonged concentration, an immersion in calm and an appropriation of the stroke – may be divided into two periods: the first, coming to an end around the turn of the 1960s with abstract geometry, uses biomorphic forms as its initial focus. The second, on the other hand, develops using vertical and horizontal lines and a restricted and delicate range of colours. A decisive element is the introduction of grid structures, seen as a codification of the two-dimensionality of the support, as well as the result of a process that records the time required for the creation of each painting.