William Burroughs, that undisputed master of collaborative art, wrote in the late 1970’s that the ‘Third Mind’ was the complete fusion in a praxis of two subjectivities, two subjectivities that metamorphose into a third: it is from this collusion that a new author emerges, an absent third person, invisible and beyond grasp, decoding the silence. The paintings that have been produced through the process of With The Artists signify not so much a third mind as a fifth mind born out of the collaborative excesses of four extraordinary artists. As such they represent an amalgamation of artistic genius and freedom of creativity where the only rule of the game was the absence of all forms of prohibition. Mark Sanders 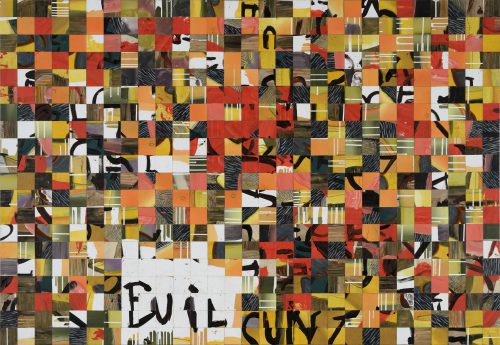 In March 2006, Jake and Dinos Chapman, George Condo and Paul McCarthy – four of the most interesting established artists on the international contemporary art scene – were invited to work together by an American curator. The result was an art project titled Meet the Artists: an explicit, ironic reference to the Beatles album of 1964 and to the homage-outrage that ten years later, the Californian avant-garde collective of The Residents dedicated to it.The project involved the creation of four engravings and eight paintings (four large-format works and four smaller ones) over the course of a year. Each work – according to a sequence arranged and agreed in advance in such a way that each artist would be the first to start two canvases and one engraving in rotation – was then sent to the various studios (in London, Los Angeles and New York respectively) so that it might be completed, until it was considered ‘finished’. This procedure echoes the artistic medium and the game known as cadavre exquis (‘Exquisite Corpse’) used by the Surrealists around the twenties, with the caveat that each participant could only see the final result of the individual chain participations. To this end, the Chapman brothers, who shared their studio, built a wall so that they could maintain privacy during the creation of their individual contributions.