“Let’s think about the simple games that we can carry out with shadows. Let’s cross our thumbs and shake the rest of our hands. We have three things: a pair of interweaved hands that shake and a shadow that is simultaneously two things; the shadow of two crossed agitating hands, and the shadow of a bird or of a butterfly that flutters its wings. The fundamental aspect is that we understand all of this, and the pleasure exactly derives from this understanding. This ambiguity, this pleasure that accompanies self-deception, is the founding essence of all visual beings. If there is something that art should do, is to clarify, making us aware of a precept: mediate always.” 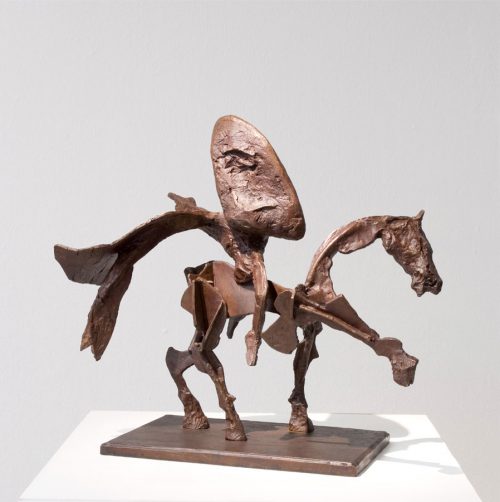 Born in 1955 in Johannesburg, South Africa, where he lives and works.

A South African artist and filmmaker born and raised in close contact with the difficult state of segregation experienced during the long period of Apartheid that ended in 1991, William Kentridge looks with extreme clear-mindedness and awareness at the history of his homeland, proceeding through powerful and poetic metaphors that expand to embrace a reflection on the universal human condition. His work, always intense and of great expressive power, reflects on the mechanisms of memory and forgetfulness, the ethical sense of responsibility, guilt and complicity, pain and injustice. Since 1989, the artist has used black-and-white drawing (pastel or charcoal) to make animated films, continuing his obsessive technique of erasing and retracing lines, one that outlines a world made up of shadows, shifts and continuous metamorphosis, a metaphor for amnesia in the light of the injustices that afflict the contemporary being. In addition to digital videos, Kentridge also makes engravings, tapestries, sculptures, bronzes and works for the theatre, recently in Italy for the Teatro di Roma. The work on display is part of the series Learning from the Absurd, which takes its cue from Gogol’s novel The Nose. The absurd, grotesque elements of the story are designed to mock schemes and the established order by means of a global language.