“I think that an artist is a deaf-mute, with great listening and perceptive faculties. Therefore, I don’t know if I am – like every artist – deaf, or highly-hearing, if I’m blind or highly-sighted. How do we know if this residue, or sort of result – the artwork – has to remain a ghost, a hologram of itself, a presence, a voice, a silent thing?” Donated by the artist. Virginia tobacco leaves, fluorescent yellow tube, iron, candle, transformer and dimmer, 1982, 43 x 53 x 7 cm. 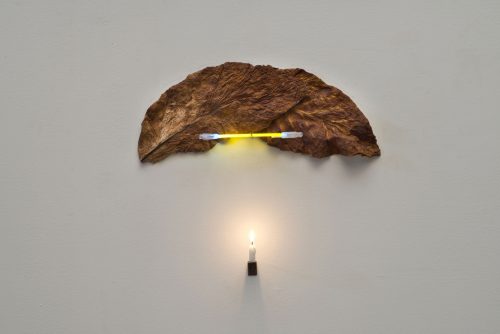 Aluminium foil, scraps, wood, debris, everyday objects, but also neon, salt, tobacco leaves, fire and ice-cold structures are among Calzolari’s favourite materials, those that allow him to highlight a principle of the reconciliation of opposites, inviting a reflection that also entails the mental value of the work. Linked to the panorama of the exponents of Arte Povera (a term coined in the second half of the 1960s by the critic Germano Celant to define the work of a group of artists who used ‘poor’ and unrefined materials such as cement, Eternit, iron, plastic and natural elements, including wood, earth and water), Pier Paolo Calzolari sees art as a meeting place between form, colour, object and environment which, by floating from one dimension to another, outline a condition of being through their incessant process of transformation. From his painting, objects and installations to his performance, video and drawings of the 1970s, his art has always been imbued with a sense of metamorphosis and an attention to the alchemical process of matter that leads his works to abandon their state of inertia and expand into the environment, to the point where they embrace a new spatial and temporal dimension.