“I always want to put forward the mental environment, one that at times I feel. ‘Seduction and Estrangement’ are together two conditions that I love to find again in art and to revive in my art. And all of this, I retrieve in my dreams, my images, that I always endeavour to elaborate and transform in objects and surroundings.” 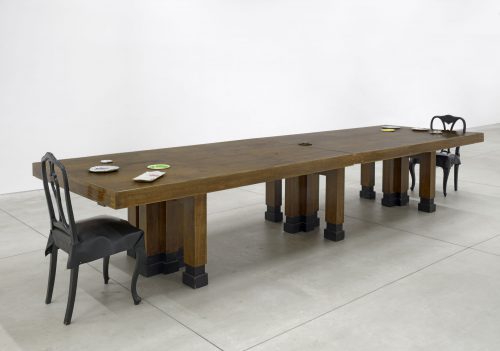 Born in Florence, 1967. Today he lives and works in Savigno, in the province of Bologna.

After completing studies in Oriental History at the University of Bologna in 1993, Flavio Favelli undertook artistic research aimed at enhancing the functional characteristics and value in terms of the use and decoration of old furnishing objects (such as chandeliers, mirrors, wardrobes, frames, vases and trays) or of everyday consumption (such as Coca Cola or Fanta bottles). Characterised by a strong autobiographical component, his works are formalised in sculptures, installations, interventions in public spaces and collages in which the assembly of various recycled materials and objects of different origins generates an overlapping of sense imbued with deeply evocative stories and memories. This operation of cohabitation, however, does not take place through a distortion of the object itself, but rather through an amplification of its being an ‘icon’, oscillating between continuous cultural references and collective and personal memories. The visual recovery and the ‘tangible reconstruction’ of elements of his own past and of the environment in which he grew up is in fact a direct testimony of the inestimable evocative and sentimental power that the artist places in the objects that surround us.