“Since always, I have used and continue to do so: linen canvases, wood, hemp tarps, materials of natural origins rich of intrinsic history. These canvases appear like patchwork, like joint fabrics, consumed and worn out by time… they are already works of art.” 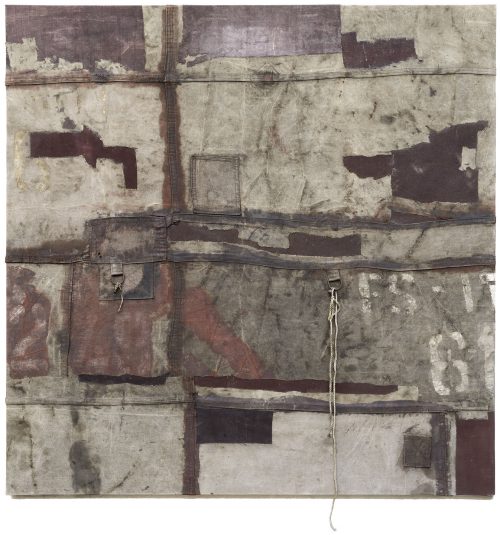 In 1980 Luca Pignatelli enrolled in the Faculty of Architecture at the Politecnico di Milano, living right through the period marked by the insights of the theorist and academic Aldo Rossi. Spurred on by the idea of the sedimentary growth of history, the artist saw a concatenation of elements and forms in painting attributable to different eras. His works feed on a deferred time, that of images that live on temporal stratifications, annulling the iconographic and linear evolution of styles. Over three decades, the artist has in fact collected a heterogeneous archive of reproductions in which figurative signs of ancient and modern eras may be recognised. A painter capable of dealing with large works, Pignatelli works on recovered supports such as hemp canvas, wood, iron, assembled paper and recycled tarpaulins from goods convoys, pursuing a poetic form strongly linked to the concepts of time and memory that feeds on images of Greek and Roman statues, marble busts, emperors on horseback, nymphs and centaurs, which rank among the artist’s favourite subjects.