“I want the work in the first instance to have a strong formal presence, and through the physical experience to activate a psychological and emotional response. In a very general sense I want to create a situation where reality itself becomes a questionable point.” Donated by the artist and White Cube. Mild steel tubes, 2011, 82 x 190 x 90 cm. © Mona Hatoum. Courtesy Galerie Max Hetzler, Berlin (Photo: def image). 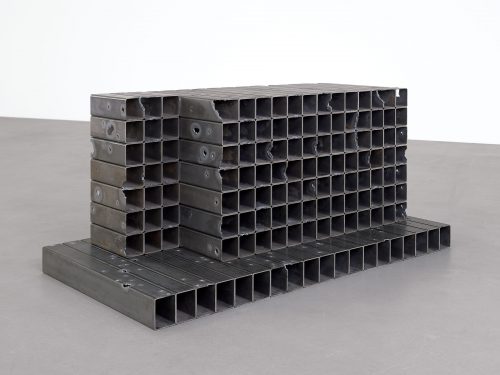 Born in 1952 in Beirut, Lebanon. Currently she lives and works in London.

Mona Hatoum was born to a Palestinian family in Beirut in 1952. During a visit to London in 1975, the outbreak of the Lebanese Civil War prevented her to return to her homeland. The artist completed her studies in London at the Byam Shaw School of Art and the Slade School of Art. With her first performances, she addressed themes such as gender, race, and the relationship between politics and the individual, while since the early 1990s she has mainly produced installations and sculptures with different types of materials. In particular, the presence of geometric shapes and grids in her work refers to the systems used to exercise control within modern society. In 2011 she was awarded the prestigious Joan Miró Prize by the Joan Miró Foundation in Barcelona and, in 2017, the 10th Hiroshima Art Prize. In 2019 she was awarded the prestigious Praemium Imperiale in Tokyo.