“I started to investigate my identity in the fifties starting with the self-portrait, to which I then added the mirror. Seeing myself in the mirror I slowly realised that I was no longer alone, that around me there were people, the world, the spaces and even the passing of time. The artistic surface became a mirror and there the world entered: on the inside of the mirror I was immersed in society and from there I realised that it was necessary to head towards it. To truly enter the object the only way is to turn your back on it and move away: the further away you go, the more you penetrate it. That’s when the reflecting artwork was becoming an active one.” 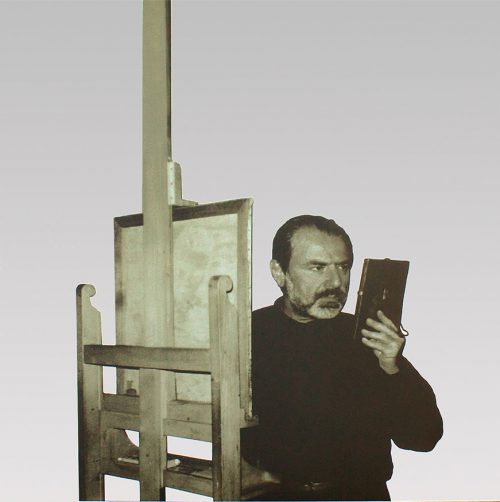 Michelangelo Pistoletto’s artistic training took place in the studio of his father, a painter and restorer, with whom he began an apprenticeship at the age of fourteen.
After studying at Armando Testa’s school of advertising graphics, he began his artistic career in the mid-fifties, holding his first solo exhibitions in 1955 and 1960 at the Galleria Galatea in Turin. Starting with his first Quadri specchianti (‘Mirror Paintings’) in 1962, on which he experimented with a new technique of photography on tissue paper applied to a mirror-polished stainless steel surface, and then moving on to Plexiglass (1964) and Oggetti in meno (1965-1966) – important opening shots for the birth of Arte Povera. Pistoletto’s works are qualified by virtue of his ceaseless experimentation, beyond any defined technique or style, and at the same time, by the progressive integration of the spectator and the space-time of reality in his work. The work donated by the artist, a self-portrait on a mirrored surface, is of particular significance. It is a selfie ante litteram, which involves the viewers by making them part of the artwork.