After leaving school and putting in a couple of years at Montréal Polytechnique, he took up painting seriously, working with a young group of local artists called the Automatistes. Their idea was to paint automatically; that is to let the hand place the paint with no conscious direction from the brain. None of the original group is painting in his style today. In 1945 he decided that it was necessary to discover nature in a new way, to observe without preconception and to paint naturally. Catherine Jones 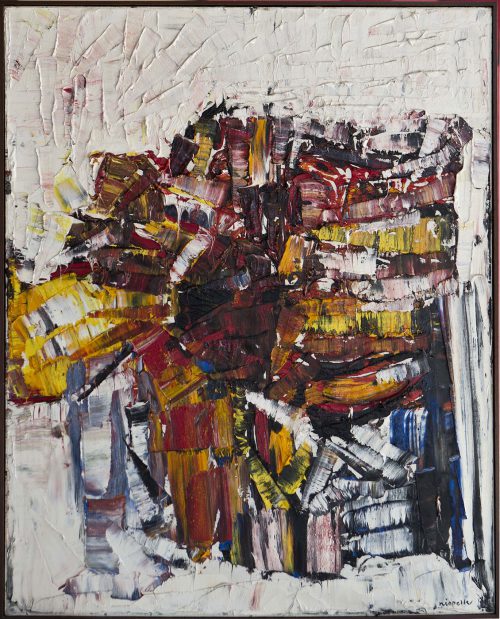 Born in Montreal in 1923, he died in Saint-Antoine-de-l’Isle-aux-Grues, Canada, in 2002. Jean-Paul Riopelle studied painting with Henri Bisson and in 1943 enrolled in the École du Meuble in Montreal. Among the most internationally recognised Canadian artists of his generation, in 1945 he established a deep friendship with his teacher Paul-Emile Borduas and several Canadian avant-garde artists who were part of the group called ‘Les Automates’, formed between the 1940s and 1950s in France and Canada in the wake of Surrealist Automatism, a method of artistic creation in which the artist suppresses conscious control over the decision-making process, allowing the unconscious mind to take over. From this derives that spontaneity that is at the basis of the lyrical-abstract language of the artist’s early works, where bright coloured paint is squeezed directly from the tube onto the canvas and then worked with a spatula. After settling in Paris in 1948, Riopelle then took part in the informal experiences of Tachisme, where an abstract painting is spread with rich mixtures of colour to form patches of material that translate into a dynamic landscape form.