Andreas Slominski’s primary concern since 1984 can be described very broadly as field research – the aesthetic exploration of everyday perceptions of the most incidental kind. There is often something insidious, and also something impish, in the ordinariness and inconspicuousness of the objects he selects. They consistently undergo a reversal of function, context and content. All of Slominski’s works can be ‘traps’, figuratively speaking. In the course of the years, the ‘trap’ has virtually become a generic term for the artist. It has become the solution in his search for a personal form of artistic expression; it has become his artistic strategy. Mario Kramer 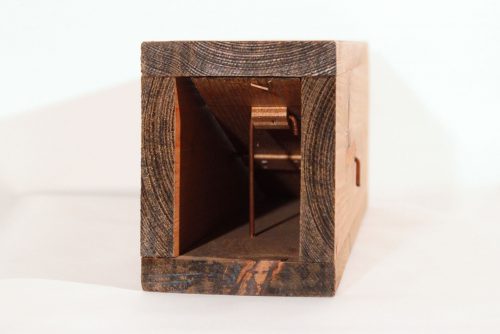 Born in Meppen, Germany, in 1959, he lives and works in Hamburg.

Often referred to by critics as the ‘Fallensteller’, i.e. he who sets traps, Andreas Slominski is a German conceptual artist whose work is seen by most as unpredictable and sometimes rebellious. Fascinated since the beginning of his career by the sculptural qualities of animal traps, the artist exhibited a mousetrap for his first solo show in Hamburg in 1987, the starting point for many ambiguous and contrasting interpretations of an object reminiscent of Marcel Duchamp’s readymades, and which – while maintaining its appearance and function intact – takes on artistic value precisely in relation to the very fact of being exhibited. Over time, the artist reworked his traps, thus offering the public complex variations with the aim of subverting expectations and perception, while investigating the role played by art. His is a scenario dotted with minor pitfalls, where simple elements become complex and vice versa.