“I think beauty is a feeling that you get after you’ve had an experience. It’s the way you feel about it that is beautiful. I don’t know if I could, like, see a face and know what the face of beauty looks like, but after I’ve seen it I know if I’ve felt like it was beauty. I want the paintings to take me or the viewer out somewhere else.” 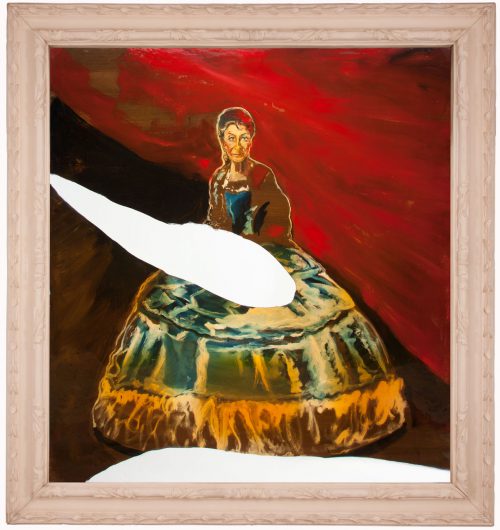 Born in 1951 in New York, he lives and works between New York and Montauk, USA.

After moving to Texas with his family, Julian Schnabel returned to his native New York in the early 1970s and participated in the Whitney Museum Independent Study Program, coming to the fore with a series of large works, characterised by a mixture of innovative techniques, such as the use of broken crockery applied to the canvas, as well as various materials in which found objects and ones full of history are given space. A painter and sculptor, Schnabel stands out for his amazing metamorphic ability and the overwhelming expressive power that he communicates through a wild and gestural, almost neo-expressionist painting, conditioned also by European influences and the Italian Transavanguardia. An eclectic genius also in the language of film, Schnabel ventured into the world of cinema to make three feature films. The work on display is a reinterpretation of classic portraiture: subject, posture, clothing and dimensions are distorted with enamel and innovative materials.