“Monumentality is the most passionate challenge for me. I like to confront myself to greatness in technical plastic terms, but also in relation to a natural scenery, historical and urban. That is antique and contemporary. My research wasn’t an easy one to find. My figures always want to reflect on the situation, that of the contemporary man, his fractures, his lost identity, the everyday incidents that surround us.” 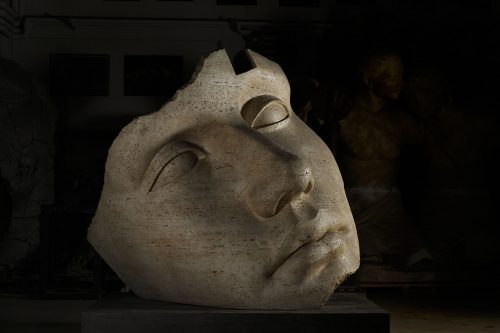 Born in Germany to a Polish mother and a French father, he attended the art high school in Bielsko-Biala and later the Academy of Fine Arts in Krakow, following the courses of the painter, set designer and theatre director Tadeusz Kantor. In 1968 he moved to Paris where he enrolled in the École des Beaux-Arts, adopting a technique of plastic representation that drew inspiration from a repertoire of forms taken from Greek-Roman antiquity: here his references were Praxiteles, Scopas and Phidias. Returning to Paris after a year’s stay in Mexico, he devoted himself permanently to the definition of a sculptural language in which fallen and fragmented giants, mutilated busts, blindfolded and cracked heads are the subjects chosen to bear dramatic witness to the workings of time, and to recount the loss of identity and points of reference of contemporary man.